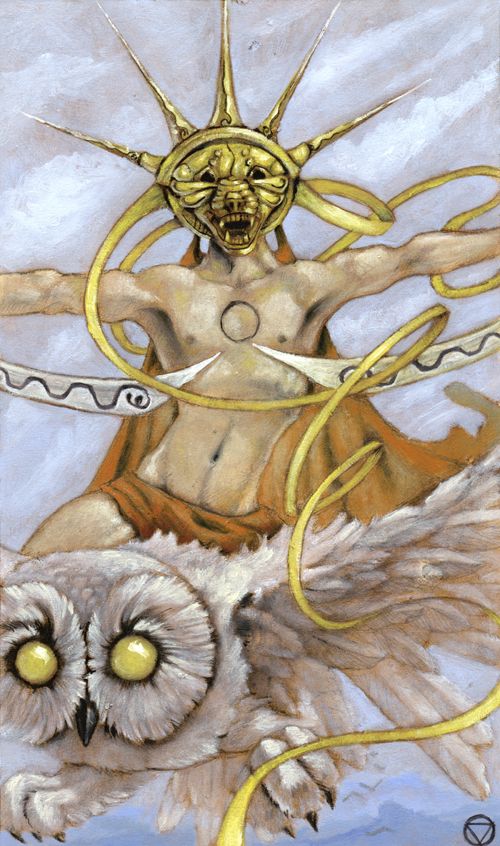 (Knight of Swords, from my favorite deck, the Mary-El)

I think there was a tarot week sometime in TD history. I wasn't around for it, so I don't care, I'm doing this anyway.

You have 800 words to write a story inspired by whatever tarot card you're assigned. Don't worry about looking into esoteric meanings -- I'll be handing out cards from decks with evocative images, but if you want to look into accepted meanings and symbology, you're free to do that as well. If you :toxx:, you'll get an extra 300 words and an extra card.

The story must be about a friendship that's being tested. In the tradition of tarot, you are not allowed to have any literal death in your story.

Some general tips for this week:

You can feel free to look up card meanings, but I'm going to be a little disappointed if your story reflects the established, Rider-Waite-Smith meaning (which is what you'll see if you look up "insert card here meaning") and not what's actually depicted in the card. For example, I gave two people the Nine of Wands -- one from the Mary-El, and one from the Rider-Waite-Smith deck. If the person assigned the first card gives me a story about fatigue after a long battle, I'm going to assume you didn't trust yourself to look at the card. These are evocative images on their own, and I didn't spend two hours digging up cards from decks with distinctive art for people to ignore them completely.

That said, if you don't know anything about tarot, it might be helpful to know the suits:

Wands are fire, passion, the thing someone cares more about than anything else in the world;
Cups or Vessels are water, emotion, the unconscious, and sometimes spirituality;
Swords or Knives are air, the intellect, the mind, and communication;
and Pentacles, Discs, or Coins are earth, material things, the physical world, and practicality.

If your card isn't any of these, it's a Major Arcana card! These symbolize the greater things, the highest themes in life. These in particular are culturally mythologized enough that any kind of established meanings will probably be the same, no matter what deck you're looking at.

If you do want to look up established meanings, this is a pretty good site, though it'll be most useful if you got a Rider-Waite-Smith card.