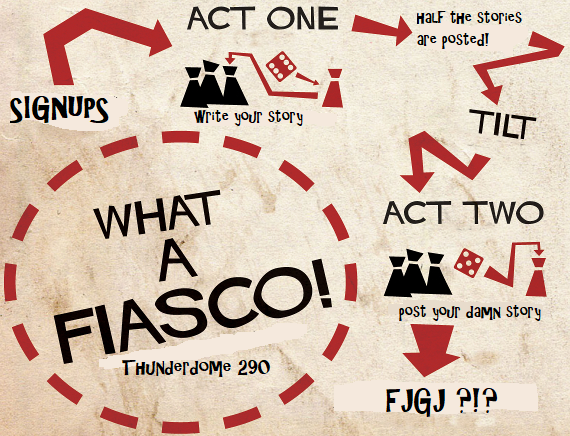 For this week, I'm stealing/recycling a prompt from Thranguy from Week 197 (thanks/sorry, Thranguy). The short explanation is as follows: Fiasco is a roleplaying game about powerful ambition and poor impulse control, in which players act out the doomed schemes and awkward fates of low-level criminals, small-town lowlifes, and other people you might find in a Coen Brothers film. The game uses "playsets" to structure character relationships and narrative elements. For this week, I'm going to be using Fiasco playsets to assign narrative elements for your story.

When you sign up, post the name of a Fiasco playset from the post that follows. (For those who know the game: core book, Companion, and Anthology playsets are in play.) If you just post "In," I will choose a playset semi-arbitrarily, and you might not like it. I will generate the narrative elements of a standard three-player Fiasco setup from that playbook for you: three character relationships, a location, an object, and a need some character has, plus a Tilt (plot twist or shift in action). Use those components to craft your story. Note that you don't have to keep things as tight as a Fiasco playset might -- you don't need to concentrate everything in the hands of only three characters -- and tone and genre is up to you; Fiasco playsets tend towards low-level crime stories and black humor, but you're not required to go that route if something else suggests itself. As with Thranguy before me, I will not be judging harshly based on absolute use of everything you're assigned, just on general "can I see some part of the prompt here?" You'll be getting a story toolkit -- make of it as you will.