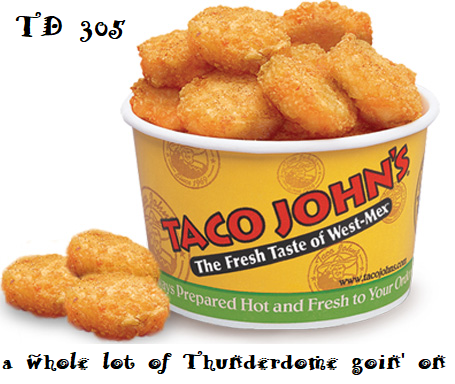 It's a song week! But first, you guys are getting storytime.

A few years ago, my partner and I went to see the Mountain Goats, one of our favorite bands. Midway through the set, frontman John Darnielle was telling a story about their early touring and commented that they were making less money as a touring act in those days than they would have working at a Taco John's. Cue an extremely drunk man near us yelling "WHAT'S TACO JOHN'S?!", and John Darnielle answering with the title of this week. A laugh was had, the moment passed, they played some songs, and all was well.

On the way home, I had to explain to my partner that the whole thing wasn't a weird joke: that Taco John's is a real Midwestern fast-food chain, and that they do, in fact, sell tater tots branded "Potato Olés." Benighted mid-Atlantic soul that he was, he had no goddamn idea that, in Middle America, tacos come with tater tots. This is a thing. I had to convince him that this was a thing.

For this week, I'm calling back to that night, both the musical portion and the "having to explain that Taco John's is real" portion. For the first part, this is a song week; your prompts will all be songs by the Mountain Goats. Pick one when you sign up, or I'll pick one for you, your choice. For the second part, I want stories about characters having to deal with different paradigms and common knowledge about the world. This can be as simple and silly as ignorance of local fast-food chains, or as complicated and serious as people confronting inborn prejudices or facing survival situations. The important thing is that some level of the conflict comes from people being unable to readily understand each other's "normal." Explore that for me. Finally, I'm setting a third ground rule here: magical realism is okay, but no dedicated SF/fantasy/horror this week. We've had a lot of genre weeks recently, and I'd like to see people flex their realistic writing muscles a bit.

Flash rules are available upon request, but they will probably be regional fast-food restaurants because it took all my willpower not to just make this Mountain Goats 'n' Regional Fast Food Week. Caveat emptor.