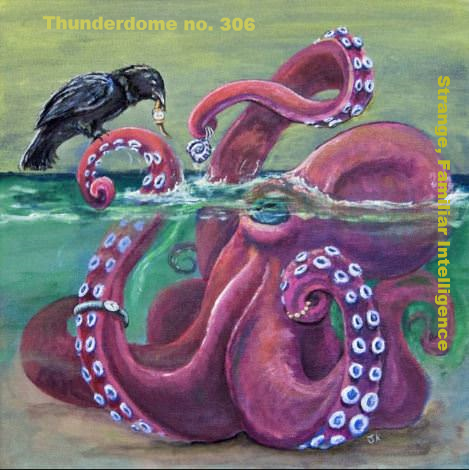 Oh cool, I won, it's my turn to preside over the parade of fucking failures that has come to characterize Thunderdome.

I considered trying to come up with something gimmicky and wacky to squeeze tepid blood from the idiot stone, but I think this week you're just going to write about stuff I like.

Okay so anyone who talks to me for longer than five minutes quickly learns that I fucking LOVE corvids and cephalopods. They're fucking smart, and probably represent the future of intelligence on Earth when we've all died from cancer of the funko pop, or whatever. But who will reign supreme once the apocalyptic dust has settled? Will it be the crow and the raven, with their mastery of the sky? Or it be the squid and the octopus, those strange lords of the deep?

Your stories should explore the familiar, alien intelligence of these animals. I expect you to at least glance at a Wikipedia article.

WHAT I DON'T WANT:

WHAT I DO WANT:

Hopefully, you'll all do your very best, and at the end of the week we will have irrefutably settled the matter of which animals will inherit the Earth when humans are gone.

If you include a cool/cute picture of your chosen animal type with your signup post, you get 100 extra words.