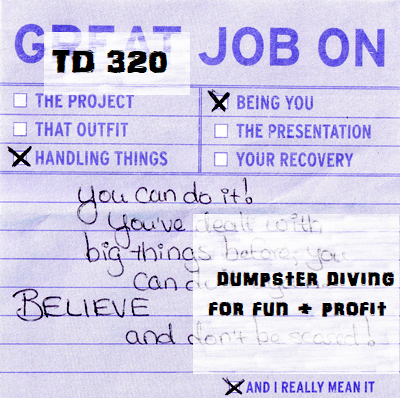 I've been thinking about no-mention stories a lot lately. As the podcast once observed, no-mentions are the most frequently ignored and forgotten stories in TD, and I think that's a shame; there's a wide band of quality there and a lot of interesting stuff. This week, I want you to rummage through the neglected piles and find something to polish up.

This week, your prompt is to rewrite a past Thunderdome story that received no mention in its original week. This cannot be one of your own stories, and it can't be one of mine (because you don't want to see the pedantic crits this would produce). Pick for yourself, or I'll randomly assign you one if you'd rather. (If you're using the archive to select a story, please pick something that doesn't have any archive tags attached: no Classics, Fanfiction, Erotica, Ock!, etc. If you're new and don't have archives access, use the archived Thunderdome threads; I'll make sure you find something you can read.)

What I'm looking for in rewrites is something that transforms the original piece while still using major elements from it / being identifiable as a derivative work. You're free to change bits as you like, but I should be able to see a family resemblance between your story and your prompt story; at the other extreme, you shouldn't just rephrase the original in your own words.

For those who like flash rules to help inspire their remixing, this week will feature two optional flash rules. You can use one, both, or neither:

1) Found objects from Found Magazine. You can pick one, or I'll assign you one.

2) Past TD flash rules/sub-prompts that were given to entrants that failed -- anything is fair game here, as long as there was never a story posted using that flash rule. These you'll have to hunt down for yourself if you want, but if you've ever seen a failure flash rule and been like WHAT A WASTE, I COULD HAVE WRITTEN A WORK OF GENIUS WITH THAT ONE, here's your chance.