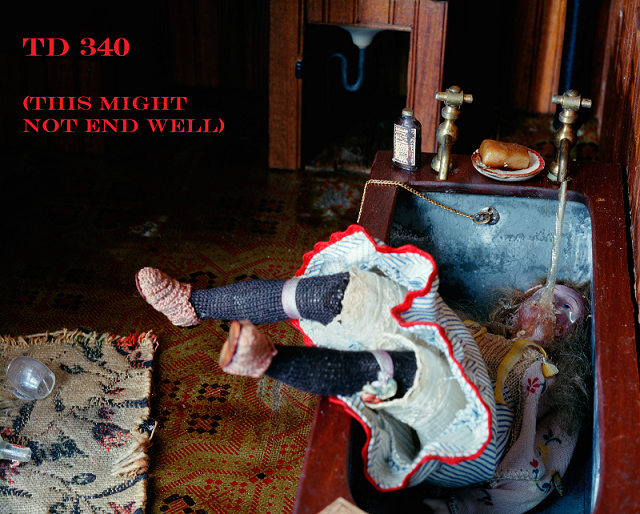 Lately I've been doing some reading about a woman named Frances Glessner Lee. Born a rich heiress, she spent the second half of her life making great innovations in criminology, earning her the nickname "The Mother of Forensic Science." Her greatest legacy is a project called the Nutshell Studies of Unexplained Death, a series of intricately-crafted doll dioramas that modeled miniature death scenes in accurate forensic detail, to be used as a training tool for detectives analyzing crime-scene evidence. The Nutshell Studies are still in use today. They're amazing works of art, fascinating works of criminal forensics, and weird and creepy as all shit.

I want you to write stories about them.

When you sign up, I'll assign you a picture of a detail from one of the Nutshell Studies. This picture is your prompt. You are free to interpret it loosely -- the scene in the picture doesn't have to literally show up, as long as I can see how you got from your picture to your story, and you don't have to write a murder mystery or even include death at all. (Murder mysteries are fine, of course, but they're not required.) My only content rule for this week is this: do not write a story where someone goes about their day and then dies/is murdered/commits murder, and that's it. I will DQ-DM for this. "Not much happens and then someone dies" is boring. If you're going to use death, make it matter.