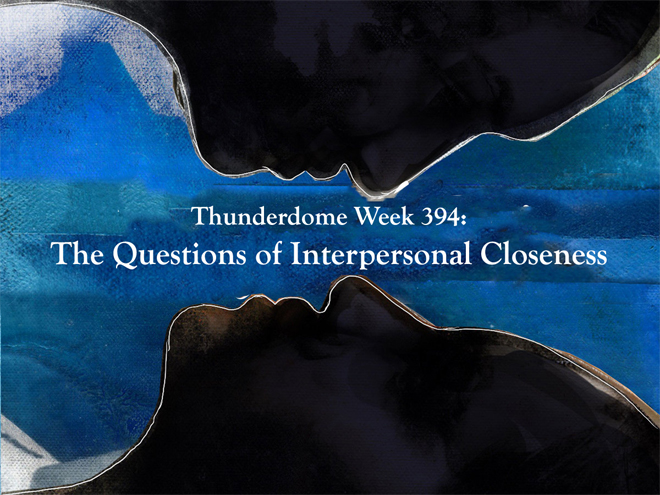 Image from the 36 Questions podcast from Two-Up Productions

In 1997, the psychologists Arthur Aron, Edward Melinat, Elaine Aron, Robert Darrin Vallone, and Renee J. Bator published a study titled “The Experimental Generation of Interpersonal Closeness.” The study explored how relationships between strangers formed and how simple activities like small talk could generate intimacy. Using a prompt composed of 36 questions, the researchers claimed they could foster close relationships between strangers. They noted “[o]ne key pattern associated with the development of a close relationship among peers is sustained, escalating, reciprocal, personal self-disclosure.”

This week, we will be using the foundation set by Aron and his colleagues by writing about relationships whether those be familial, platonic, or romantic. When you sign up, you will pick a question created by Aron from the list here. (I've excluded some of the questions that won't work.) You will then try to answer the selected question for at least one of your characters within the confines of your story.

You can be as literal or figurative with any of those questions as you want. A story about Question 6 ("If you were able to live to the age of 90 and retain either the mind or body of a 30-year-old for the last 60 years of your life, which would you want?") could either feature a character concerned about their appearance or a character who has Dorian Greyed themselves. A story about 35 ("Of all the people in your family, whose death would you find most disturbing? Why?") could be about an actual death or an intense family bond.

As some of the prompts are more interesting than others, I will not make the questions exclusionary. You can pick one even if another writer has already done so. If you are desperate for further inspiration, I or one of the other judges can give you a flash rule regarding the setting.