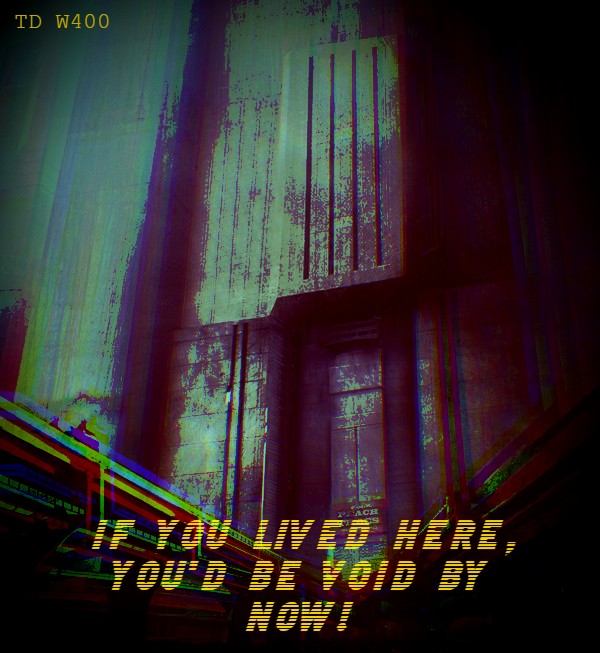 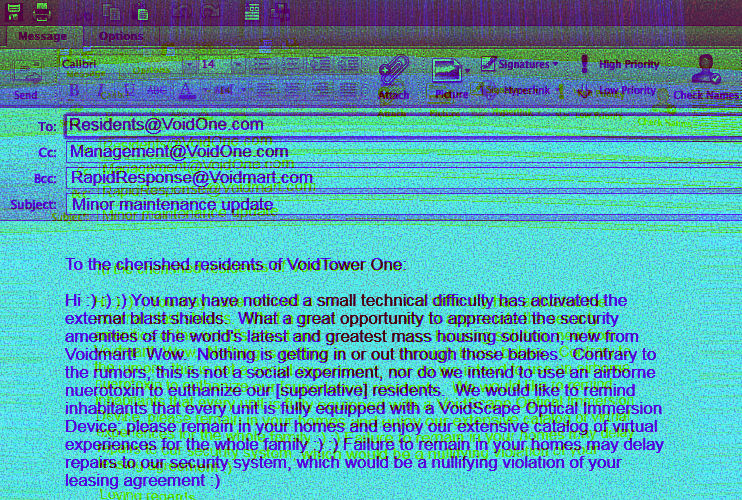 VoidTower One by Voidmart is the world's first completely self-sufficient residential megatower, boasting thousands of housing units, nearly two hundred restaurants, several grocery stores, and all the shopping and entertainment amenities a 21st century consumer could dream of. It was designed with centuries of residency in mind, funded by the limitless resources of Voidmart, and built to withstand virtually anything that man, nature, or god can muster.

A mysterious, anomalous event in tower security has caused the impenetrable blast shields to activate, trapping staff, residents, and [redacted] inside. Your character(s) will fall into one of two factions:

Team Jailbreaker: Human(oid)s of various origins, trapped inside the vertical city with nothing to do except cower in their units or ascend to the top of the tower and solve the mystery of the anomaly.

Team Voidstricken: Maybe they're human, maybe they're management, maybe they're something quite other; either way, they probably know what's up at the top of the tower, and will stop at nothing to prevent the jailbreakers from reaching it.

This information is only here to help you visualize the setting. You don't have to set your stories in these locations if you don't want to. Since the world of Voidmart is a somewhat magical place, it's entirely possible that the tower looks a little different from story to story ;)

Located just above the grand entrance, the mezzanine is the lowest floor currently accessible to Jailbreakers and Voidstricken alike. Fountains and gardens give the space a park-like feel, while various shops and restaurants scattered throughout the greenery offer residents an unobtrusive retail experience. Notable shops include the Golden Bean Cafe, a beloved staple of the Void Inc. family.

The big shaft is a bank of public elevators that extends from the mezzanine all the way to the top of VoidTower One. Presently, the elevators are not operational due to a small hiccup in the security system :)

For the strong of calf and thigh, there is a series of emergency stairwells that could, theoretically, allow residents (and others) to move between floors, though the fire exits themselves are blocked by the blast shields.

The thousands of virtually identical residential units are populated by virtually identical furniture and trinkets—all lovingly crafted Void Inc. merchandise, of course. Each unit comes standard with a VOID virtual reality device, which residents are regularly encouraged to utilize.

The observation deck, AKA "The Top"

Under normal circumstances, this verdant rooftop garden offers the most spectacular view in the world. As of this writing, residents have been strongly warned to make no attempt whatsoever to reach the observation deck. This seems to be the source of the anomaly that tripped the security system and activated the blast shields.

Team Jailbreak: you don't know what the hell is going on up there, but you might be able to reach the top with great difficulty.

Team Voidstricken: you know what's going on at the top (or at least, you have some idea), can go there at your leisure, and will stop at nothing to prevent the Jailbreakers from getting there.

THIS PART IS THE RULES, READ THIS PART EVEN IF YOU SKIMMED ALL THE ABOVE WORDS

After you sign up, I will assign you to one of the two teams mentioned above: Jailbreaker or Voidstricken. You don't get to choose. I will tell you which team you're on.

If you are on Team Jailbreaker: Your character(s) is trying to get to the top of VoidTower One and solve the mystery of the anomaly. They don't have to necessarily reach the top, but that's the general idea.

If you are on Team Voidstricken: Your character(s) are trying to prevent the Jailbreakers from reaching the top of VoidTower One.

Collaboration is encouraged, but by no means mandatory. You are free to tell the story of VoidTower One however you like, so long as you follow the basic guidelines in this post.

Flash rules available on request. See PAQ below for details.

See the bottom of the post for wordcount and deadlines.

Voidmart is a shared setting that has been the subject of four previous prompts, which are linked near the top of this post. In short: it is sort of a Lovecraftian parody of the chain big box store—an unholy amalgam of retail giants, sprinkled with a dusting of sinister magic. This prompt is the first to not take place in the megastore itself, so it's a great place to get in on the ground floor, as it were.

Stories in this setting can be any genre and any tone, so long as you incorporate some of the reasonably vague setting details I've offered you in this post.

Q: Do the details of my story have to match up with other people's stories?

No! You can tell a story that is completely your own. You get to decide all of the major details, such as: the truth about what's happening at the top of the building, whether or not the residents ultimately escape, who the antagonist is (if there is one), and so on.

You can also choose to collaborate with others if you want; there will be special event channels on Discord to facilitate this, but it's not mandatory.

Q: Did you steal the premise and flavor image from the 2012 film Dredd, starring Karl Urban?

Yes! Yes I very much did!

Q: Can my story take place outside the tower?

No! Emphatic no. I will accept endings where characters somehow escape, but otherwise everything needs to take place within or on top of the tower.

Q: So let me get this straight—the Jailbreakers are the good guys, and the Voidstricken are the bad guys?

No! Members of Team Voidstricken may have very good reasons for limiting access to the top of the tower, while Team Jailbreaker may have sinister reasons for wanting to gain access. You, the writer, get to decide!

Q: Are you assigning flashrules?

Yes! If you want one, just ask. Flashrules might offer your character a secondary goal, a unique Voidmart brand device, or a unique role within VoidTower One.

Q: Can I set my story inside a Voidmart inside VoidTower One?

Unlike regular weeks, the winner of this week will not judge the following week. Instead, you will receive a prize!

Q: You have said a lot of stuff in this post. How uptight are you about prompt adherence?

This is a party week so people should have fun. As long as I can tell you made a good faith effort to get into the spirit of the week, I'm not going to penalize a little bit of coloring outside of the lines.

33 Total Submissions, 7 Total Failures:
1.
Armack
Whatever Happened to the Maintenance Guy?
2.
Loss
PTSDeedly Do
One Morning
3.
Simply Simon
Team Spirit
4.
Ceighk
It's the Shit that Makes You Unique!
5.
Staggy
Mind the Step
6.
Adam Vegas
Time Jazz
7.
Something Else
Cleaning Up
8.
sparksbloom
The Groomers
9.
Winner
QuoProQuid
An Eggshell
10.
Tyrannosaurus
every man would pray in the belly of a whale
11.
a friendly penguin
Level Two
12.
Uranium Phoenix
When Life Gives You Radioactive Potato Snacks, You Should Figure Out What To Do With Them
13.
Black Griffon
Double dipping
14.
dmboogie
...way down, all the way down, all the…
15.
Applewhite
Neighborhood Watch
16.
Schneider Heim
What is home, but each other?
17.
Winner
Thranguy
Void: 'Where' Prohibited
18.
Honorable Mention
Yoruichi
Immaculate
19.
Anomalous Amalgam
New Beginnings
20.
Dishonorable Mention
Pththya-lyi
Your Best Self
21.
Antivehicular
Hanging Fire
22.
Barnaby Profane
Employee of the Monad
23.
Dishonorable Mention
SlipUp
No Evil
24.
Hawklad
Last Chance to Advance Beyond Human
25.
Doctor Eckhart
VoidWives
26.
curlingiron
Demon Dearest
27.
Chairchucker
Tough on Stains and Accursed Abominations
28.
Honorable Mention
The Saddest Rhino
Departures
29.
Anomalous Blowout
Smooth One, Ex-Lax
30.
BeefSupreme
Going Down
31.
sebmojo
The Doppler Effect
32.
Disqualified
Entenzahn
Ego
33.
Redemption
Flesnolk
Week 400 redemption, 877 words
Failures who signed up but did not submit: