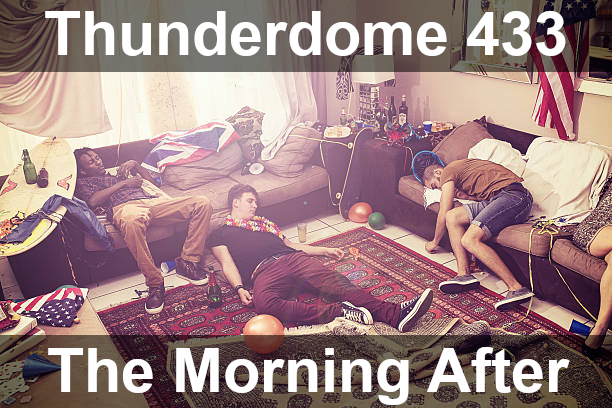 oh god not so loud

You're pretty sure it was someone's ... birthday? Promotion? The host was pretty wasted when you finally met them - at least you think that was the host. It was hard to tell, what with music loud enough to wake the dead and more alcohol than a brewery. You think someone brought in a fog machine - either that or there was a fire. Only a small one, though.

whose traffic cone is that?

Now the sun's starting to come up and the crowd of people sprawled out across the living room are starting to stir. Your head's fuzzy, your throat is sore and there's a weird bruise on your arm but you had a hell of a time.

... so why do you feel like you're forgetting something?


9 Total Submissions, 5 Total Failures:
1.
Your Sledgehammer
Maiden Voyage
2.
Nae
The Integration of the Persistence of Memory
3.
Dishonorable Mention
Applewhite
What if the Devil was One of Us... Trying to Find His Way Home
4.
Honorable Mention
flerp
idk some gay shit
5.
Chili
Bubby, You're a Man Now
6.
Winner
Thranguy
Trance
7.
Weltlich
Witches Built My Hotrod
8.
Loss
Yoruichi
Spangs & Ress
9.
sebmojo
Party Time
Failures who signed up but did not submit: