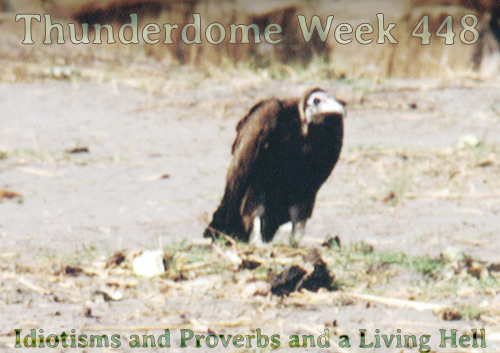 Once upon a time, a man named Senhor Pedro Carolino wrote a book: New Guide of the Conversation in Portuguese and English. It was "written with serious intent, and for the purpose of initiating Portuguese students into the mysteries of the English language." The only catch? He didn't speak English.

Instead he used French/English dictionaries and translated from Portuguese to French to English. What resulted was a hilarious mishmash of awkward phrases that make almost no sense at all, and is definitely not an effective way to learn English phrases. So that'll be fun.

But we're not done yet. Sure picking a silly phrase and writing a silly story is fun, but it's also not what I need right now. This week, I want to cause pain. I want your characters to fucking bleeeeed. In addition to choosing an "idiotism and proverb" you will be writing a story that does not have a happy ending. Things are not wrapped up nicely, this is not an afterschool special. Shit is fucked, man. Your characters are fucking doomed. There is more suffering in life than death, so your character(s) also cannot die at the end. You are going to ruin these fuckers. Just because it isn't a happy ending doesn't mean you don't need to wrap things up, so please actually write an ending that feels like it stems from the events in your story. and writing a bad person getting their comeuppance counts as a happy ending, so i want to feel these characters pain, i want to feel bad for them, i want to suffer alongside them.

1. Pick a line from this list for loosely interpreted inspiration: https://en.wikisource.org/wiki/English_As_She_Is_Spoke/Idiotisms_and_Proverbs (duplicates are ok i don't really care)
2. Write a story without a happy ending
3. No character death
4. Only likable characters
5. Write a complete story

I also got shit to do, so short week this week, submissions close SUNDAY MORNING. not night. morning.