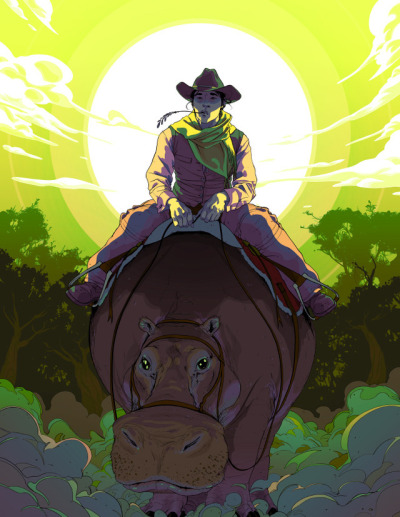 I hope I’m not blowing anybody’s mind when I say that writing has never been about ideas (ideas are cheap and easy and we’ve all had a million of ‘em), writing is about execution. There is no idea so squirrely that it’s unworkable in the hands of a skilled writer. Jim Butcher once said the same thing and somebody called him out and said “okay fine, write a book where the lost Roman 9th Legion all get Pokemon” and then he went and did exactly that. A swamp Western about guys who ride hippos? Sarah Gailey crushed it.

So here’s how this week works. When you sign up, I will craft you a terrible prompt. Just the worst shit I can think of. And I want you to make it work. They won’t be vague like “a man goes on an adventure”, they’ll be extremely specific and squirrely (like, for example, “a Western about a mercenary company who ride hippos”).

Also, when you sign up, I’d like you to post your own terrible prompt. Anybody who feels unhappy with the prompt I’ve given them can use yours (EXCEPT YOU, YOU CANNOT USE YOUR OWN), but I am trusting y’all not to half-ass them. One person per hellprompt, post inthread if you want to claim one. When you trade it in, your old prompt goes into the hellrule pile. You can also trade prompts (hellprompt or regular prompt) with somebody else if you wish, though both parties need to agree and post inthread. When writing hellrompts, consider River of Teeth and The Furies of Calderon as a good guide for the sorta shit I’m looking for; go big rather than small, pulp absurdity and tabloid weird rather than abstract and floaty. Give it teeth. I'm going to try to fire off the first patch of prompts really quickly so folks can have more examples for writing their own hellprompts, so if you sign up fast you'll get a very fast turnaround (and also please use the prompts I'm handing out as further examples re the vibe).


20 Total Submissions, 4 Total Failures:
1.
Dishonorable Mention
Sonny
Tiger Flip
2.
Chernobyl Princess
Breaking Hearts At Camp Kippakriptid
3.
ChickenOfTomorrow
Awakenings
4.
Winner
Sailor Viy
Wings Against Stone
5.
Weltlich
Well Rooted
6.
Azza Bamboo
From The Memoirs of a Grey Alien Diplomat
7.
Simply Simon
Horse Out of Hell
8.
Carl Killer Miller
The Nixon Cheese
9.
Tosk
While My (Air) Guitar Gently Weeps
10.
Honorable Mention
Yoruichi
Buzzer Beater
11.
QuoProQuid
Leonardo (or How I Learned To Start Worrying and Hate The Time Travel)
12.
My Shark Waifuu
Prisoners
13.
Burning_Conch
Nuclear Blues
14.
Loss
The man called M
They are made of stupid
15.
Pththya-lyi
Fly Me to the Moon, Let Me Kick Its Fucking Ass
16.
Chairchucker
Could Also Be a Squid, I Guess, I Mean I’m No Marine Biologist
17.
rohan
Agent Double-Oh-Sexy in: Big Shoes To Fill
18.
Thranguy
What the Poor Man Has, What the Rich Man Needs
19.
Captain_Indigo
Four More Years
20.
sebmojo
The role of works in a sinful world
Failures who signed up but did not submit: