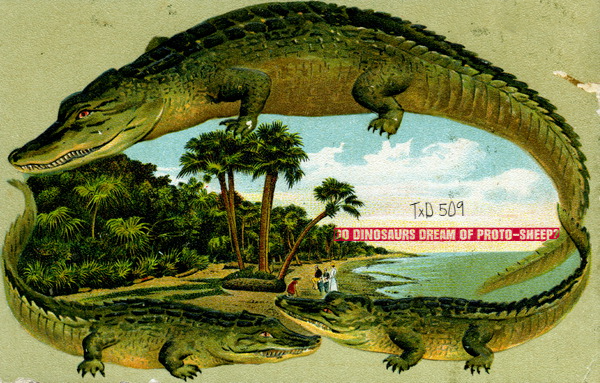 Growing up, I would have wildly vivid dreams every single time I fell asleep. The majority of those dreams were nightmares. And I’m talking 4-5 times a week. And it was not uncommon for me to have the same nightmare over and over, week after week, month after month, the same horror and terror again and again for years. But, I was a pretty laid back kid so I never mentioned it to anyone. I guess I assumed that going to sleep just generally kind of sucked for everybody and went about my life without questioning it. To make a long story short, I was diagnosed with severe sleep apnea in my thirties, I have a neat little machine that helps me sleep restfully now, and I no longer dream.

[spoiler]Well, rarely. Sometimes I’ll unconsciously take off my mask cuz I get hot in the night or whatever buuuuut...[/spoiler]

I’m telling you all of this because I got a lot of creative legwork out of my dreams-- I’ve submitted multiple stories to Thunderdome, including at least one winner, that came to me almost completely fully formed while I was asleep-- and I’m kinda bummed that I had to choose between dreaming weird, intense shit all the time or wildly decreasing my chances of a heart attack, stroke, diabetes, Alzheimer’s, death, etc., etc.

I think we can wring a little more juice out of my dreams if you’re willing to squeeze for it, though.

So. Sign up. I’ll give you one of my dreams -- possibly, probably a nightmare. You will then interpret that dream. You will then write a story inspired by your interpretation.

A super literal interpretation (ie, your assigned dream is about a scary alligator and you say 'you're afraid of alligators' and you write me a story about someone being afraid of an alligator) feels a little uninspired but is not, technically, against the rules of the week. I'd appreciate a little more creativity, just saying.

10 Total Submissions, 2 Total Failures:
1.
Albatrossy_Rodent
Gaby Baby
2.
Honorable Mention
Uranium Phoenix
The Work
3.
Tars Tarkas
As I Went Down In The River...
4.
kaom
Court Case #TYR509 - Exhibit F
5.
Antivehicular
Death and the Emperor
6.
Honorable Mention
Thranguy
Can't Fight the Flood
7.
Winner
Sitting Here
big stick ideology
8.
Loss
The man called M
Cat's still in the Cradle
9.
The Cut of Your Jib
Where the Rubber Meets the Road
10.
Redemption
flerp
it’s nothing to be scared of
Failures who signed up but did not submit: