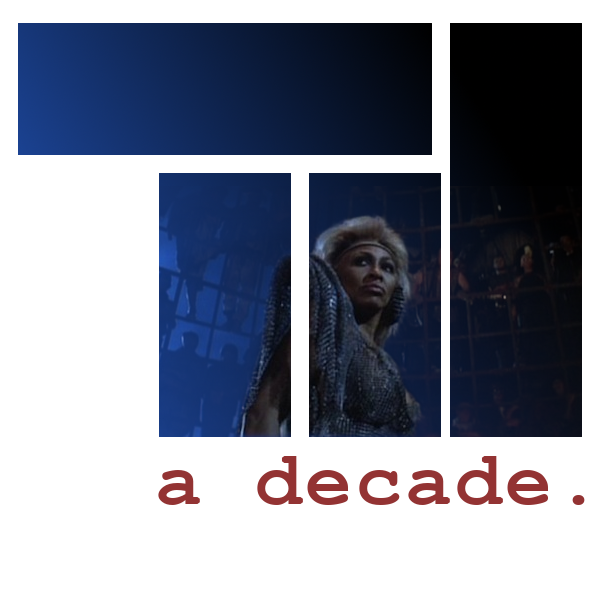 It’s a little weird to be typing this post. Just shy of ten years ago, I was a stupid moron living in a party house, gazing out through my bedroom window at a cherry tree wondering, “Why are my stories so shitty??”

Naturally, I logged on to Something Awful dot com to try and sort it out. MEANWHILE. Three unknowable eldritch titans were conceiving betwixt them a flash fiction contest. Rounds would be short and brutal, the prompts borderline nonsensical, the results unforgiving.

After some straining and grunting, Thunderdome was born screaming onto bloody sands, and promptly gave everyone and everything the finger.

The first prompt was “a man agonizes over his potatoes.” The first combatants were eager but confused. Those early days were heartless, with the insults coming fast and loose. The stories were rough, often bad, and even the good ones were unlike anything most of us had seen in publications. There was no particular reason for Thunderdome to continue for any length of time, and maybe that’s why it’s persisted now for a decade.

No one came into this with longevity in mind. Thunderdome has always been pure, concentrated “just write” We put one word after another onto the page, and next thing you know, ten years have gone by. And you look around and notice that everyone you started out with has gotten pretty goddamn good. Maybe you yourself have picked up a few skills along the way, too.

In ten years of Thunderdome community, careers were born. There were marriages, deaths, births, gatherings. A surprising amount of travel. People coming together in ways that I would never have fathomed in August of 2012. There is a globe-spanning network of friendship and creative camaraderie that is second to none.

I could wax on for a considerable amount of time, but that wouldn’t be in the spirit of a flash fiction contest! Without further ado, I give you…

A variation on the classic Thunderdome experience: A [blank] agonizes over [blank]. When you sign up, you have the option of filling in the blanks for yourself, or you can ask the judges to fill them in for you. If you request a fill-in-the-blanks, the judges will select words randomly from a big list of people and things.

People who sign up for this prompt are entitled to #SpinTheWheel! one(1) time. See Chili’s post directly below for details on Thunderdome’s 10th birthday livestream wheel-spinning extravaganza!

Flash and hell rules are still given out upon request, whether or not you choose to use your spin on the wheel. Again, see Chili’s very illuminating post below for details! Note: Asking for the judges to fill in your blanks does NOT count as asking for a flashrule. Flashrules will be handled slightly differently this week.

Entrants to the vanilla prompt can choose to join the ladder prompt later, but they have to declare their intent to do so in the thread.

This is where it gets interesting. This challenge isn’t for the faint of heart.

The structure is as follows:

Prompt #1: Same as above: A [blank] agonizes over [blank]. Identical to the first prompt, except you’ll have to write a whole lot faster!
Prompt #2: Retro Flashback: Thunderdome Week 80: Tell me a story about your life
Prompt #3: 250 words about WONDER. More info here.
Prompt #4: Your story must be about a wizard, who does magical wizard stuff. More info here.

This is a ladder prompt! You can join the fun any time you want, but you can’t skip ahead. Let’s say you want to write for prompt #3. You’ll still need to write something plausibly story-like for prompts #1 and #2 before you’re allowed to write for #3. And obviously, the sooner people submit stories for each prompt, the faster the prompts get unlocked!

These stories are going to be quick, nasty, and ridiculous. The judges will be looking for boldness, panache, daring, fierce styles, and a whole lot of gall. Don’t think, just write.

Entrants in this category are entitled to #SpinTheWheel up to four(4) times—one(1) spin for each story submitted as part of the ladder prompt. Please see Chili’s very helpful post below for info about the wheel.

PLEASE STATE WHICH OF THE TWO PROMPT CATEGORIES YOU’RE SIGNING UP FOR IN YOUR SIGNUP POST. You can switch later if you want to.

Boilerplate rules: No erotica, google docs or external links, ideological screeds, plagiarism, fanfic (Fanfic of other TD stories is ok)
Questions? PM me, or head to #Thunderdome on the Thunderdome Discord server. Direct all questions about #SpinTheWheel to Chili!

102 Total Submissions, 3 Total Failures:
1.
Uranium Phoenix
Thesis Retrospective: Results Analysis for Sub-Universe Generation Method for Obtaining Large Quantities of Iron (Final_Final_ActualFinal_2_Edited)
2.
derp
Untitled
3.
Tars Tarkas
Agony and Empire
4.
PhantomMuzzles
Noctilucent Cloud
5.
MockingQuantum
An Account of Two Most Unusual Gentlemen, In Search of Supernatural Sustenance
6.
Albatrossy_Rodent
The Ass of the NPC
7.
Thranguy
Reflection
8.
Yoruichi
Giant Varantula
9.
a friendly penguin
Two Spies Walk into a Bakery
10.
Chernobyl Princess
Just Like Tesco! (what the fuck is wrong with me)
11.
flerp
Dumb Ass
12.
a friendly penguin
The Color of Laughter
13.
Simply Simon
Domino’s March
14.
Staggy
Ringside Manner
15.
Sailor Viy
Understand (Horse Version)
16.
J.A.B.C.
The Lane
17.
flerp
I saw an eagle cry!!!
18.
QuoProQuid
Rocket Man
19.
Sailor Viy
Neil & I
20.
MockingQuantum
Duck and Cover
21.
PhantomMuzzles
Stink Purse
22.
Albatrossy_Rodent
Gravity and the Grouse
23.
Tars Tarkas
Some Might Say I Am A Fan Of Cinema
24.
Chernobyl Princess
Ski Jump
25.
DigitalRaven
The Thief of Opportunity
26.
Uranium Phoenix
The True Nature of Reality
27.
Staggy
Sleepwalking
28.
J.A.B.C.
A wonderful day
29.
QuoProQuid
The Last Moment
30.
J.A.B.C.
Old mountain road
31.
J.A.B.C.
Big
32.
Thranguy
If I Knew You Were Coming, I'd Have Baked a Pie
33.
Antivehicular
The Archeopteryges and the Giant Freaky Dragonflies
34.
Kuiperdolin
The least dangerous most dangerous game
35.
Uranium Phoenix
Monument
36.
flerp
Let us choke on ash
37.
Chernobyl Princess
Sledding
38.
Staggy
The Wizard
39.
a friendly penguin
Art
40.
MockingQuantum
The Brass Key
41.
PhantomMuzzles
Proscenium Lights
42.
Screaming Idiot
The Man with the Pantry Keys
43.
QuoProQuid
Repair Job
44.
Tars Tarkas
On the Way to Fuzzy Wuzzy World
45.
Yoruichi
Big Day Out
46.
The Saddest Rhino
Transcript of Stream #25 of Channel “Korean Food Made Blasphemous”
47.
The Saddest Rhino
This Title Originally Referred to a Parody Song Making Fun of a Problematic Musician but Then I Found Out the Parody Was Performed by an Also Problematic Comedian, so I Won’t Name It I Guess, However if You Figured Out What This Song Was Before Reading This, Good for You.
48.
Thranguy
The Dancing Colonel's Wonder Show
49.
lightrook
Untitled?
50.
Copernic
Kudoszu
51.
Something Else
The Brown Round
52.
Yoruichi
Magnitude 6.2: Strong. [i]Weak buildings are damaged. Fragile and precious objects are destroyed. Walking steadily is difficult, and will remain that way for the foreseeable future.[/i]
53.
Simply Simon
Dinosaur’s Fangs
54.
Nae
Handle With Care
55.
J.A.B.C.
Property rights
56.
sb hermit
Thinking ahead
57.
Yoruichi
The resulting eruption is used as a cautionary tale for new acolytes to this day.
58.
Simply Simon
Clash of Blues
59.
The Saddest Rhino
Pencherita Malam (Night Storyteller)
60.
Armack
Kindness Bandits
61.
a friendly penguin
Words of Power
62.
The Saddest Rhino
Art is Subjective and So Is Your Dumbass Opinion
63.
Bad Seafood
Lunar Libertines
64.
Bad Seafood
Crunch Time
65.
Bad Seafood
Roi Soleil
66.
Uranium Phoenix
Dirk Venerator - Episode 17 - Fugitive Chronomancer
67.
Beezus
Sstrizzr, King Lizzr
68.
Staggy
Still Life
69.
hard counter
The Amazing Technicolor Scream Coat: An Editorial written by Winston A.S. Parish for the TheDailyClickBait.com
70.
Hawklad
Old Bones
71.
PhantomMuzzles
Happy Happy Happy
72.
MockingQuantum
Siren Song
73.
Simply Simon
Smaller Than 420 Microns
74.
Fumblemouse
Rite of Passage
75.
Chernobyl Princess
Pushing The Limits
76.
hard counter
Wax Wings
77.
Lippincott
Untitled
78.
hard counter
A Treasure's Worth
79.
The man called M
My Daddy
80.
Idle Amalgam
Dream Job
81.
QuoProQuid
Do No Harm
82.
Antivehicular
Disappointment Foreshadowed
83.
kaom
A Spiral, Not a Loop
84.
Antivehicular
Wondering and Wishing
85.
Applewhite
The Final Blasphemy
86.
curlingiron
Survival of the Fittest
87.
My Shark Waifuu
Total Eclipse of the Heart
88.
Noah
Everyone Loves Dogs
89.
Thranguy
Swords and Time
90.
The Cut of Your Jib
Apocrypha: The Book of Revelations [s]First Draft[/s]
91.
The Cut of Your Jib
Yo Celly Pt. 1
92.
rohan
Iceberg Theory
93.
hard counter
Please Watch Dad Do a Cannonball
94.
Tars Tarkas
The Wizard Watched Trading Places Right Before This Story
95.
Bad Seafood
Magic Scrolls
96.
kaom
That Time We Were All Wonder Woman
97.
SurreptitiousMuffin
Matey Potatey
98.
Antivehicular
Something Like Necromancy
99.
kaom
Lurking in the Depths
100.
curlingiron
The weirdest thing is that this wasn't even the first time something like this happened around me
101.
My Shark Waifuu
Fly Ball
102.
Disqualified
sebmojo
Now you hear me, now you don’t
Failures who signed up but did not submit: